Music Village offers community the chance to sing, dance and learn about music

On an average Tuesday night at Music Village in South Bend, more than a dozen musicians are tuning up their instruments and selecting the evening’s play list. Sitting in a circle, some of them brandish guitars, banjos or a ukulele.
Here the novice instrumentalists mingle with seasoned musicians. Each sings or strums along to any variety of tunes from Jimmy Buffet’s “Margarita Ville,” Gram Parsons’s “You Ain’t Going Nowhere” or David Bowie’s “Modern Love.”
In a world of frequently hidden costs and company bottom lines, the jam session asks for nothing. Not even an RSVP. Those involved come as often as they like and leave when they feel like it, leaving nothing behind but the memory of a good jam.
“We are meant to be an open-door sort of place, where people can feel safe and comfortable engaging in the arts,” said Josh Aerie, the executive director of Music Village.
The organization’s goal is to give the community the power to share music. Those who visit Music Village can invest their time in any number of jam sessions, including guitar and ukulele. For a tuition rate, those interested in learning how to become a musician can find piano, bass, drums, cello and music theory lessons, to name a few. In August, a form of African dance and drumming called Uzima will be offered.
But Music Village would not be accomplishing its goal if the organization did not also go out into the community to share the music. Musicians who jam together are frequently involved in community outreach and play at a number of events and locations in South Bend. Music and cultural programming opportunities are provided to public schools in the South Bend and in the Elkhart area, as well as at the Center for the Homeless and the Boys and Girls Club.
In 2011, the executive director from Old Town visited South Bend to give a presentation about the school for some community members.
“That was the spark that started Music Village,” Aerie said.
Music Village first opened the summer of 2012 and operated from the basement of the JMS building, 108 N. Main St. What started as a single class with four guitar players has grown exponentially. The 5-year-old organization now serves more than 300 people. There are approximately 100 students who pay tuition and take music lessons, which supports the core of the organization’s business.
In October 2016, The Music Village signed a lease with the St. Joseph County Public Library, which owns 301 S. Michigan St. — the site of a former restaurant that closed, leaving the space empty.

It was not just the space that The Music Village needed, but also a need to be seen and heard. The move has helped to put the business on the map, and not just because it is an above ground facility.
Walking past 301 S. Michigan St., it is not difficult to see the activity going on inside. Every jam session and dance lesson is framed by a set of panoramic windows that could be credited with helping to draw more people to the organization.
“Really at the heart and core of Music Village is our mission to be part of the arts and culture in downtown South Bend,” Aerie said. “Through this relocation project which we are in the midst of as you can see, we are hoping to realize our dream by being very present on this corner. We are very much wanting to be an anchoring cultural institution down here in South Bend.”
Much like the Old Town school, the community is welcome to participate and in any number of the classes or jam sessions.  Rhythm or no rhythm, everyone is welcome. Instruments are also available for students to use if they do not have their own.
For Aerie, a longtime cellist and conductor, a life without music is a life without rhythm. Aerie said he was drawn to work as the Music Village executive director to help employ the tools to share music with the community in a way that most would not see, unless they were in a big city like Chicago. Aerie has served in the role since 2015.
“It seemed to be a way to engage in my hometown,” Aerie said. “And further the cause of musical arts in South Bend and be art of the renaissance that is going on here in downtown and bring the music to people.”
More change is on the horizon for The Music Village. The new space will soon feature a number of classrooms, sound rooms with adjustable acoustics and a variety of other enhancements. Construction is anticipated to begin in the next two months.
If all goes as planned, The Music Village will move out of the basement and into its new home permanently at the end of the 2017.
Aerie said none of this growth would have been possible without the support of South Bend and surrounding communities, who not only attend the Music Village, but also helped to give financially to the program.  The majority of funds for the construction project were raised during a “Give Local” fundraiser in May. Aerie said the organization is now on track to complete construction as planned. The project was estimated to cost $150,000 to complete.
“As a young organization, this is a big project for us,” Aerie said. “Being here has already been a game changer. I am very confident that when we move in here, that growth is going to continue.”
A second phase of construction will include renovation of the lower level of the building and some outside aesthetic features of the building, within the next year.
Those interested in contributing to the cause can give via tmvgive.org.
“We are intent on not only developing arts and culture through music and dance specifically here in downtown South Bend,” Aerie said, “but really reaching out to our community and to folks that might not otherwise have the ability or may not have music, art and dance accessible to them.” 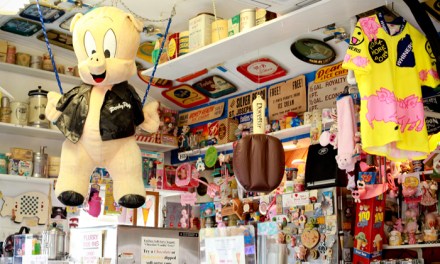 Local ice cream shops serve cool treats, each with their own unique flair