On a Thursday afternoon in early April, Chicago-native Brian Dougherty stands inside of a nearly-empty taproom as a small team of staff bustles behind him, cleaning, putting the finishing touches on menu items and ensuring the space is ready for its first customers.
In just a few hours, Brian would unlock the taproom’s doors and welcome the public for the first time.
“I’m so excited for the community to see this place,” he says as he looks out of the taproom’s line of windows. His gaze falls on a field of hops just beyond the building’s perimeter, green buds just beginning to sprout. “The community has been so supportive of us, and we can’t wait to share it with them.”
In April, River Saint Joe, 15475 Walton Road, Buchanan, opened its doors after years of planning and building. Initially, the brewery, which is located on the property of Flatwater Farms, opened for carry-out only due to the COVID-19 pandemic. However, once bans are lifted on in-person dining in the wake of COVID-19, the brewery will be open for more regular hours, with an expanded menu.
“[Opening a brewery] right now has been difficult, obviously,” Brian says. “But we are still really excited to share this. It just means we start in a more limited form, and once these clouds lift and these restrictions go away, we will be able to really share it as we intend it. Even in its current form, we are really excited.”
For Brian, River Saint Joe’s opening was years in the making.
The farm-to-table brewery, which grows many of its own hops for its beer and produce for its food, was greenlit by Buchanan officials in 2017. Still, Brian says he had been dreaming up River Saint Joe for at least three years before that, after teaming up with Fran Tuite, the owner of Flatwater Farms and a longtime friend of his wife’s.
Despite the years that have passed since the idea for River Saint Joe was conceived to the brewery’s physical opening, Dougherty said the mission had remained the same: to promote good food, good beer and sustainability.
“We are just trying to get people out on the farm and enjoying what the farm can responsibly produce,” he says, standing in front of a line of taps produced with Flatwater Farms hops. “I enjoy the transparency aspect of farm-to-table dining. It’s the knowledge that people have first-hand that what they are eating and drinking is from Berrien County, from Buchanan, from southwest Michigan. It’s exciting to drink a beer and know that it is made of our hops, and the food is from this farm. That’s special.”
When customers enter into River Saint Joe’s dining room, they will see excerpts of the poem “The River St. Joe,” written by Ben King in 1894, printed on the walls. The poem describes a relaxing, dream-like day on the St. Joseph River where the writer “live[s] once again in the old summer time; for my soul it seems caught in old time’s undertow and I’m floating away down the River St. Joe.”
Brian says the brewery was named after that poem — in addition to the farm’s proximity to the St. Joseph River. When customers take a seat at the bar, he hopes that they are able to feel the same sort of relaxation and sense of belonging that is described in the poem.
Currently, Brian is anticipating the day he can host a grand opening and the brewery can become a community space where friends and family can share a meal under the stars, in the shadow of the hop garden.
“I want people to be able to be together in this beautiful space, connected to the land,” he says, smiling as afternoon sun beats down on the farm. “I want people to leave here feeling like they took a break, like they escaped from the world for a little while.” 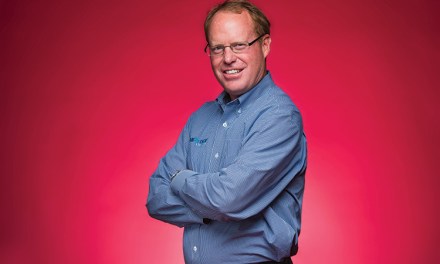