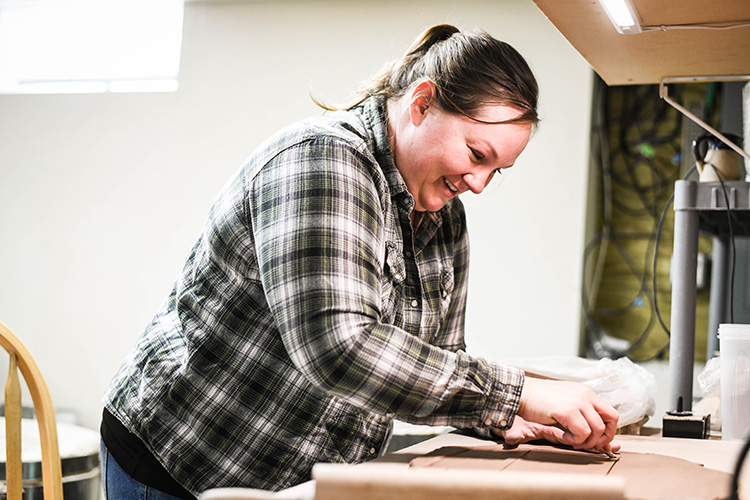 When Julie Ford and her boyfriend moved to Galien, she was not quite sure what to do with herself.
The transition from Grand Rapids to the smaller town left her wondering how to express herself in a new environment. Now, what began as an attempt at clay work at her kitchen table has expanded into a body of work that has taken over two-thirds of her basement.
After establishing her home studio, where she can spend her time creating pieces she loves, she feels like she has found her passion through her pottery.
Owner of ChromaFire Pottery, Julie’s work sets itself apart with whimsical designs and painting. Her hand-built mugs and pieces have glaze seemingly melting down her creations. Some of her work has batik-like coloring, where stripes and shapes have been removed to create crisp lines on a mug that feels good to hold. Some of her more intricate work includes handles with sculpted tentacles that seem to reach for the drinker’s beverage.
Creating unique, ceramic mugs has become Julie’s specialty.
“I just want to make things in my basement,” Julie says. “It’s very soothing. If I have a bad day, I can just start pounding out clay and make something very beautiful. Your whole mood changes.”
Before she began her clay work, her boyfriend reminded her that she had spent good times with her mother at a paint-your-own-pottery studio in Grand Rapids. He encouraged her to build on the idea of painting pottery.
“I thought it was the coolest thing ever,” Julie says of the studio she used to visit. “I never really liked the things that they had to paint, but I could just pick whatever was there.”
Having not created anything from clay herself since high school, Julie decided it was time to give it a try again. She bought a box of clay.
Julie’s pottery work started small, in just a tiny corner of her basement.
“I am completely self-taught,” she says. “I just wanted to make a cool mug and find something that I was passionate about, and that’s what I found.”
Aside from clay work she had done in high school, Julie had not worked with the clay medium extensively. Her most recent experience was at the paint-your-own studio. In that setting, the customer picks a pre-dried clay piece. The customer then pays to paint the clay piece as they wish, and then the shop fires up the kiln to finish them. The pieces are then picked up on a later date. To begin from a box of clay, like Julie decided to do, was a new experience.
“I was horrible at first,” she says.
She watched tutorial videos online and found posts that showed her how to do the things that she struggled with.
“I remember I tried it out on the kitchen table first,” Julie says. “The clay was completely stuck to the enameled kitchen table. I couldn’t get it off the table.”
Frustrated, she questioned what she had gotten herself into with beginning to work with clay.
She laughs as she remembers that moment now.
“I thought, ‘what did I get myself into? This is never going to work out,’” she says.
Julie found that she preferred to hand-build pieces. She owns a pottery wheel, but for most of her work, she rolls out clay, cuts it to size and dimension, and works to build the structure of her pieces. When she feels challenged, she uses it as an opportunity learn.
Points of structure like building upright and closing seams were integral to perfecting her technique.
“It’s amazing how much I learned in such a short time,” she says.
She continues to create work using her hand building technique. Challenging herself a bit more, Julie has begun working with her pottery wheel a bit more. A recent project has been creating matcha tea bowls for Apothica Teas in Niles.
Her work can generally be seen at the Buchanan Farmers Market, various art festivals around the southwestern Michigan region and Apothica Teas in downtown Niles. Her signature tentacle mugs can be found at Apothica Teas, where the owner, Laura Hollister, and her shop’s steampunk theme, inspired Julie to challenge herself on the design.
Julie enjoys speaking to potential buyers about her creative process. She puts love into each piece she makes.
“I’m already in love with it because I made it. I just like talking to people about something that I’m passionate about, and seeing them light up over something that I made with my hands,” she says. “It’s a cool feeling.”
She creates each mug and piece from the literal ground up. For her, It’s a very personal experience.
“I think a lot of people think that I just paint it. When I tell them that I bought this 50-pound box of literally wet dirt, and made it into this, that gets their attention a little bit more,” she says. 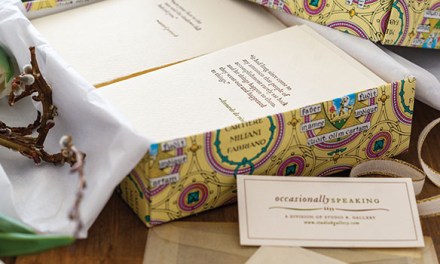 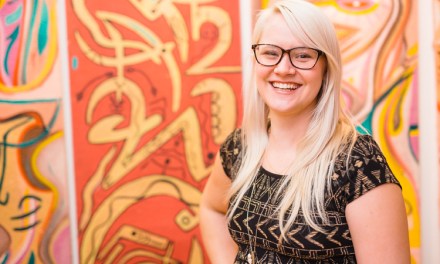 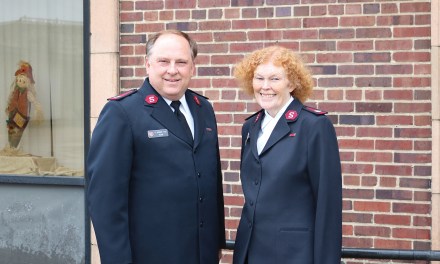 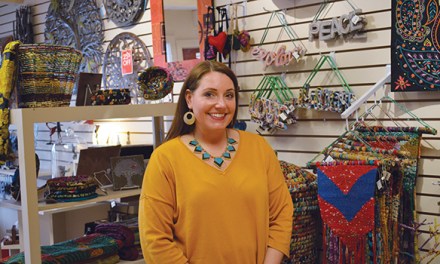