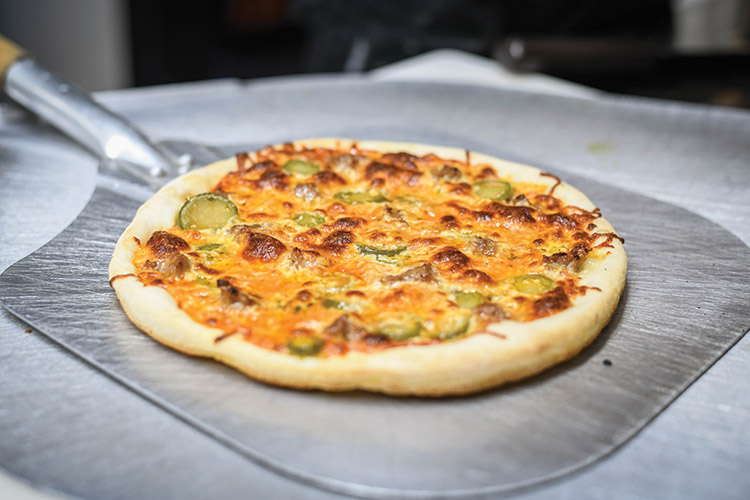 Running a restaurant is difficult work. Running a restaurant that relies on seasonal tourists during a global pandemic? That requires rockstars.
That’s just what Tim Tinker and Alain Helfrich, co-owners of Propaganda Pizza in Sister Lakes, have done in their first year of business.
“We created a barrier to create more social distancing and created curbside pickup options, a lot like all of the other restaurants,” Tim says. “Myself and Alain adjusted our schedules to make sure we could increase our hours of operations from five days a week to seven days a week, so we were an available option for everyone in the Sister Lakes area and beyond.”
Tim and Alain know a thing or two about the restaurant industry — between them, they have 40 years of restaurant experience. Tim started out as a dishwasher at a small lunch spot in California about 20 years ago and never looked back, and Alain’s grandfather was a Certified Master Chef, and he grew up in his grandfather’s kitchens. According to Alain, those formative years in his grandfather’s kitchen were integral to developing his culinary standards.
“Cooking happened every day [in my grandpa’s kitchens], often four to five times a day,” Alain says. “The convenience of prepared meals was rejected in my grandparents’ house. We constantly prepped. We constantly cooked, snacked and ate throughout the day. Three meals from scratch turns into an all-day event. This taught me prep, forethought, knife skills and passion for food.”
Food is life to these guys. Though they entered the industry for different reasons, they say creative expression is what has caused them to fall in love with the restaurant business and to stick with it.
“We’re both also artists — he’s [Alain] a photographer and I’m a painter and designer — and there’s something about the restaurant industry that allows you to express yourself creatively that other industries may not afford those opportunities to do,” Tim says. “We’re able to fulfill both of those desires [at Propaganda Pizza].”
About five years ago, the two started to work closely together during the opening of the Crooked Ewe Brewery in South Bend — Alain still works there in the kitchen as the executive chef now that they have reopened, and Tim still works doing some design work and banquet and catering coordination.
“He [Alain] ended up getting hired in the kitchen in a restaurant we were both working in together, and a music interest is what actually first sparked our friendship,” Tim says. “From that point forward we both really had very similar management and restaurant philosophies on customer experience.”
They spotted an opportunity to fill a niche for pizza in Sister Lakes and jumped on it.
“We loved a pizza place up the road that burnt down a while ago and have always hoped a year-round spot would reopen,” Alain says. “Then the opportunity to open a restaurant ourselves became an option and we decided to go for it.” 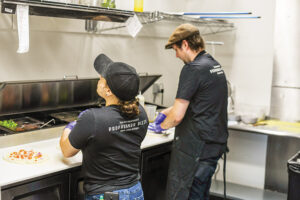 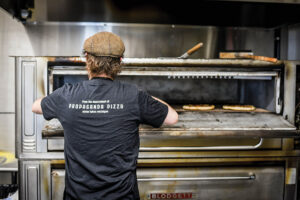 ALL ABOUT THE BASE
Propaganda Pizza just celebrated its first anniversary, and before the pandemic hit, Alain and Tim thought they had already faced their biggest challenge by deciding to stay open all winter. But from the get-go, they knew they wanted to be more than a summertime restaurant.
The pair knew that it would be difficult to during winter, but they doubled down on their commitment to the local community, and their customers as a whole, and stuck it out. Tim says they were excited to see that they even had customers brave the winter drive from Chicago for a slice of Propaganda Pizza.
“We didn’t want to be just a summer place. So we really established our local crowd to be regular customers throughout the winter, and they supported us through the whole winter, and it was awesome,” Tim says. “We’re really grateful to all of those people who supported us through the winter and now through this pandemic. We have [had] really great local customers in this first year, and that’s been awesome. It’s been great to see.”
But it’s not just the customer base that Tim and Alain are concerned with; it’s their pizza base, too.
Tim explains that when it comes to making Propaganda’s pizzas, it’s all about starting with the freshest ingredients and having the best base. Alain, who is the head chef at Propaganda Pizza, says he chooses to do things just like he learned in his grandfather’s kitchens. All sauces, including their white sauce, are handmade, and they source the best ingredients they can find for all of their menu items. The dough is prepared fresh from recipes they have created, and the flour is imported from Italy.
When it first opened, Propaganda Pizza offered pizzas only in one size, but now they offer nearly a dozen different pizzas in small or large sizes (you can even choose triangle or square cut for your slices) as well as salads and breadsticks. They recently added cheesy garlic bread to their menu after their manager created it and ate it all winter, and it’s turned out to be a hit with customers.
“Alain does a really good job with all of his food, including everywhere I’ve ever worked with him, which is that he makes craveable food,” Tim says. “He hits a lot of different flavor profiles, even if it’s the simplest food, that just makes it craveable, and that’s always exciting.” 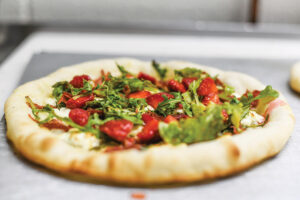 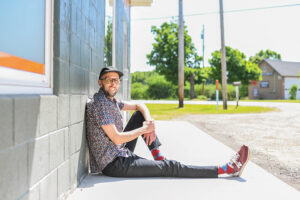 INVESTING IN THE COMMUNITY
Tim says the response from the community in Propaganda Pizza’s first year has been overwhelmingly positive, and that he and Alain are proud of the relationship they — and the restaurant — have established with the community and their seasonal customers.
“A couple times a month we get a phone call or a direct message on social media letting us know how much they [customers] appreciated our pizza and customer service,” Tim says. “These are such rare moments in the hospitality industry; they make us so proud every time we receive a contact like that.”
Propaganda Pizza works directly with the community by partnering with local farms — such as Krohne Plant Farms and Sowers Purse Micro Farm — to offer locally sourced ingredients on its seasonal Farmer’s Table pizza, a customer favorite in the spring and summer, according to Tim.
The pizza joint was also one of the 1,200 local Michigan restaurants who partnered with Farm Bureau Insurance of Michigan as part of the company’s Economic Give Back Program. The insurance company sent its members, as well as first responders, $25 vouchers to be spent at any of the partnering restaurants, according to the insurance company’s website.
“It was a fun, fun partnership,” Tim says. “I’m glad they picked us, because it was a good time to do it and it was a fun thing to promote.” 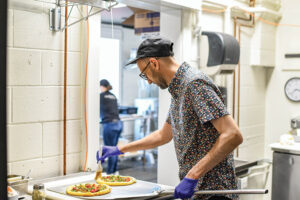 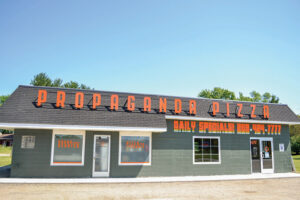 MORE THAN JUST PROPAGANDA
Advertising has been a huge part of getting Propaganda Pizza’s name out to the community, and its name alone no doubt will cause a few eyebrows to perk up.
“One of the reasons we decided on the name Propaganda Pizza was that the marketing possibilities are endless,” Tim says. “With a name like this the only prerequisite is the branding has to be bold and exciting.”
The word propaganda may elicit negative connotations for many, but Tim and Alain have used it in a disruptive and refreshing way, with striking imagery and bold pizza proclamations — Proclamation No. 18: Silence means security. Chew with your mouth closed. — to double down on pizza culture.
The pair says they use social media in the majority of cases to advertise because it gets their images and messages to a more targeted audience who might be interested in their pizza. And from what they see, it’s working.
“We have customers who regularly drive here from South Bend,” Tim says. “So we have been actively looking at venues where we could open another Propaganda Pizza in South Bend.”
That’s good news and good business for a small-town pizza joint.
“We want to give our guests the best quality product and customer service experience every time they choose to dine with us,” Alain says. “We want it to be a fun and engaging experience whether you are dining in with us or for takeout.” 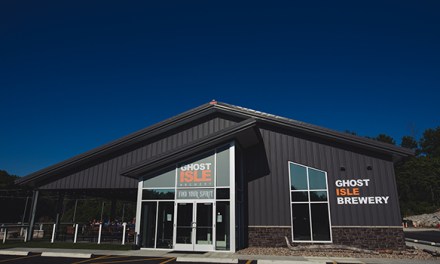 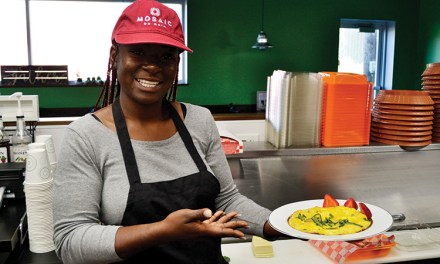 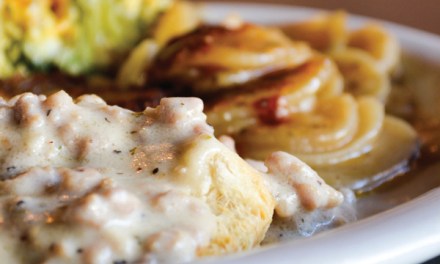 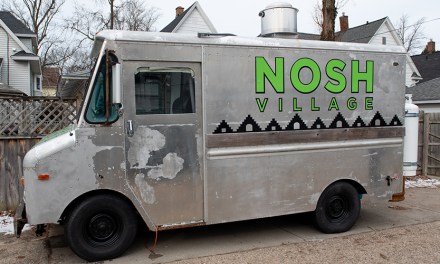