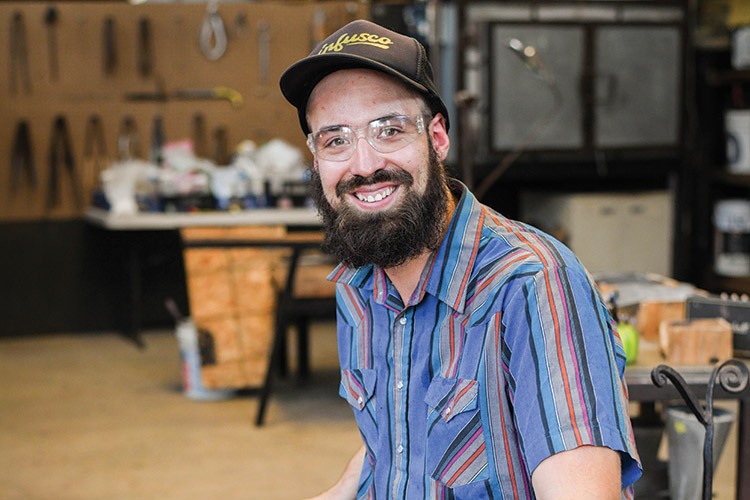 Eli Zilke and Rachel Brace spin around one another in the hotshop of Water Street Glassworks. They’re carrying stainless steel rods with molten glass on the tips while sashaying across the room.
Rock music is blaring on the radio trying to overpower the sound of the furnace, and the duo is idly chatting. They’re creating blown-glass pumpkins for a fundraiser for Water Street Glassworks, a nonprofit art school and public access studio in Benton Harbor.
Eli is making the pumpkin base and Rachel is making the stem. Without discussion, Rachel arrives with her molten-hot stem as Eli’s pumpkin begins to cool. They attach the two pieces and Eli works swiftly to wrap the stem around a metal rod, affecting a curlicue shape.
Eli is the studio manager, production designer, and a glassblowing instructor at Water Street Glassworks and Rachel is the assistant studio manager, a production assistant, and a teaching assistant.
“Glass blowing is kinda different in that it’s not a solo art form,” Eli says. “I require a group of people to help me make whatever I’m gonna make.”
The nonprofit serves at-risk students in Benton Harbor and surrounding communities to teach them the art of glass work as well as life skills through its Fired Up! program. The program is an 80/20 split between Benton Harbor residents and non-Benton Harbor residents.
In fact, Eli got his start in glasswork 16 years ago, when he was only 12, in the same program. Now, he’s teaching others. He says the program was a transformational experience.
“Glassblowing is an expensive venture, to keep all of the equipment up and running it, it’s literally almost taught nowhere in a high school setting,” he says. “For them to have access to this thing that is so inaccessible for most people, I think it’s amazing.” 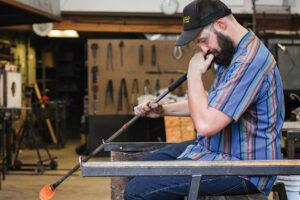 HUMBLE BEGINNINGS
The idea to create a space like Water Street Glassworks was inspired by the Pilchuck glass school run by Dale Chihuly in Tacoma, Washington. Jerry Catania, the founder of Water Street Glassworks, was a student of Dale’s in 1972.
“Jerry went there in 1972. He had just gotten his degree in art education and didn’t have anything to do,” says Lynne Clayton, the executive director of Water Street Glassworks. “So he hitchhiked out there. They were literally just building the studio. It didn’t even exist at that point. He learned how to build a studio, and he came back here and started his own studio.”
The first version of the studio was operated out of the back of a truck, according to Lynne.
In April 1997, Jerry and his wife Kathy began moving forward with their vision to create a glass arts school. They purchased the former Hinkley Building in Benton Harbor.
The building — constructed in 1898 — was rundown and ready to be condemned, but it received a second chance when Jerry and Kathy breathed new life into it.
In 2004, Water Street Glassworks officially opened.

FIRED UP!
The main focus for Water Street Glassworks has been operating the Fired Up! program as well as its other educational programs, according to Lynne.
“Because Jerry was an art educator, he wanted to provide a place in the community that would give students who were at-risk from the Benton Harbor school system a place to come and learn something that they wouldn’t necessarily be able to do at school,” she says.
Students in the Fired Up! program visit Water Street Glassworks one day a week and learn skills at each of the studios that WSG has to offer, Lynne says. Through the course of an entire school year, they practice those skills and build up a body of work to showcase. At the end of the year the organization hosts an in-house exhibit to showcase the student work.
The students also participate in the Krasl Art Fair at the end of the year, where they’re able to sell their work. They get to keep 70 percent of each sale while 30 percent goes back to the program to cover material costs, according to Lynne.
Each of the studios the students participate in (glassblowing, flat-glass, stained-glass, bead making, etc.) also creates a pay-it-forward item, where 100 percent of the proceeds go to help fund a scholarship for the next year’s students. In 2020, in just two days at the fair, the students sold more than a combined $8,000 worth of pieces, according to Lynne.
“To have an adult say, ‘I value what you do so much that I’m willing to give my money to you,’ is something that is so empowering,” Lynne says. “Most teenagers don’t get that opportunity to have that feeling.”
Lynne says that working with glass offers students the opportunity to learn problem solving and communication skills. Just as Eli and Rachel have learned to communicate verbally and nonverbally as they work together to make a piece, the students also learn. The ability to learn how to express themselves and what they are feeling through the art of glasswork is what Lynne says is most valuable.
“I think that’s something that’s critical for students who are — especially 12 to 18 years old — they’re really trying to figure out who they’re going to be as a human being, as an adult, and to find a safe place where they can learn how to express themselves, to learn how to fail,” Lynne says. “I don’t think there are many opportunities for teenagers to fail safely in school these days. So I think the arts contribute to all of those things.”
Eli says they teach students more than just how to work with glass, they teach them how to be well-rounded individuals. They touch on aspects of public speaking, the business of art, presenting and critiquing of your own work, as well as how to present yourself as an artist.
“There’s a really amazing focus that comes with the intensity of the heat,” Eli says. “I never have kids goofing off or slacking off. Everybody’s so, you know, singularly focused on what [is] the task at hand.” 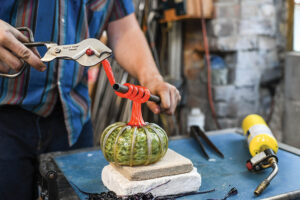 EDUCATION FOR ALL
They have after school students who range in age from 12 to 18, and they even have an 80-year-old artist.
“I would say our life force is Fired Up!, you know that’s what we’re all kinda driving for is providing opportunity for those kids,” Eli says. “But we also have adult renters, we teach adult-level classes, we teach homeschool programming, we do a lot of production work.”
Water Street Glassworks is grant funded and donor funded. But in a COVID-19 world, they’ve had to shift their model a bit. In the past, Eli says the majority of his time was spent teaching classes. With social distancing restrictions in place, that’s a new normal.
“Pre-COVID it was, like 90 percent teaching and 10 percent all of those other things,” Eli says. “Since then we’ve had to kind of shift, and we’ve become much, much larger on the production side of things. We did a lot more pumpkins this year than we have ever done.”
Classes range the gamut from all of the services that WSG provides and can be anywhere from half-hour guided instruction to classes that continue for several weeks and are open to anyone.
“We want to teach classes and teach people how to do this,” Lynne says. “Most of our students are not artists, most of them are [office] professionals actually, who, you know, take this up because it’s really challenging and rewarding and hard, but also gives them that creative outlet that they don’t have at work.”
The organization hasn’t been able to offer all of the classes this year that it normally does because of the pandemic. But Lynne says that hasn’t stopped people from showing their support of the organization.
“I wasn’t sure if people would respond and want to be buying things,” she says. “But the support that the community has shown has been incredible. It helps us, but they also get this beautiful object that makes them feel good.”

A SHIFTING LANDSCAPE
Because of the pandemic, Water Street Glassworks has had to learn to adapt quickly.
Its leaders modified their process so that only one person participates in blowing on the tube and an inflation device is used, which allows the pipe to be inflated without a person blowing into it to prevent the spread of the virus.
The organization has also had to shift to more production-based fundraising to defray overhead costs this year.
They have several fundraisers throughout the year of large-scale production of items. In the fall they make pumpkins, around the holidays they make ornaments, and in the spring they make glasses as part of their event “Hot Glass Cold Beer,” where they partner with The Livery just down the road. All of the proceeds from pumpkin sales go directly back to the school. On a recent weekend, they sold more than 200 pumpkins, according to Lynne.
“I have lots of hopes for the future. I think we’re all going to be fine. It’s going to be weird, and a new normal,” Lynne says. “But I think it also has given us some opportunities to think of ‘what do we really want to do,’ ‘what do we really want to offer,’ and be very intentional about that.”
One of those focuses is to expand the artist residency program she began in 2017.
“One of my big goals in continuing Jerry and Kathy’s legacy here is to have a place where artists of color can come and have a place to show their work,” Lynne says. “To have the opportunity to have a residency to connect with our students so that they know that that could be them, too.”
The gallery space at Water Street Glassworks is open for all to visit. Artists consign their work and the nonprofit helps facilitate the sale. About 95 percent of the art sold in the gallery was made in the Water Street Glassworks, according to Lynne.
The gallery also features a small exhibit of art from artists at a curated exhibit in Krasl Art Center called “Artists as Influencers: Pathways in Glass.” The idea behind the exhibit is to focus on the mentor/mentee relationship in glass work and will run through Nov. 29. Jerry was instrumental in working with Krasl Art Center to curate the exhibit, according to Lynne.
Sadly, Jerry passed away in May of this year and wasn’t able to see the exhibit come to fruition.
Lynne and Eli are hopeful for the future of Water Street Glassworks.
“[Water Street Glassworks] is a rare community asset that people have to take advantage of,” Eli says. “Otherwise it doesn’t exist.” 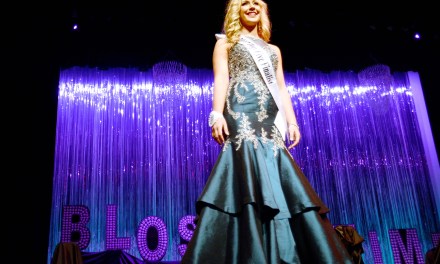 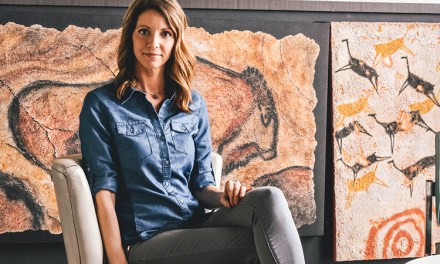 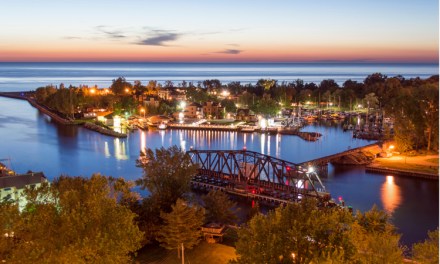 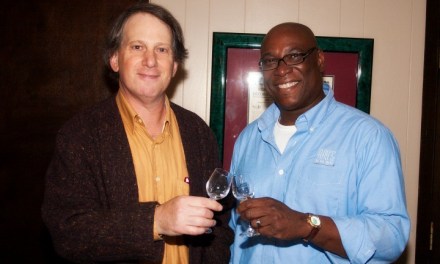 You’ve Been Spotted: A Spirited Night