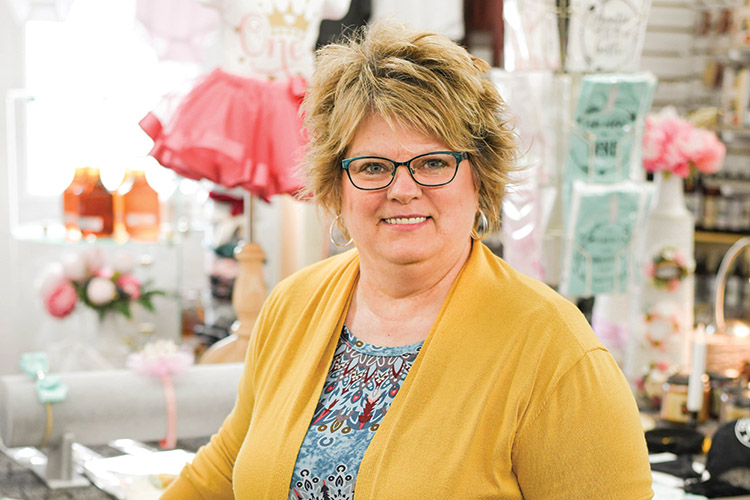 Busy Saturdays at the farmer’s market start early and stay busy from open to close. Shoppers walk by with their purchased foods and wares, peeking at what else is offered as they make their rounds. Stopping for conversation with friends and favorite vendors is common.
It’s all a part of the bustling mornings Gayla Lemler loves about the South Bend Farmer’s Market.
Flowers, crocheted items, felt masks and maple syrup line the Lemler Valley Farm booths at the market Gayle runs with her family. At the end, the aromas of the season engulf shoppers as they walk by. Her booth is Goosebeary Candle Shoppe, a shop of hand poured candles, wax melts, room sprays and oil for diffusers.
Since 1999, Gayla, owner of Goosebeary Candle Shoppe, has been making her own candles. She recently celebrated her 21st year in creating aromas and warmth in homes across the region.
“On Oct. 1, 1999, I poured my first successful candle,” Gayla says.
It all started when she sold candles at the South Bend Farmer’s Market as a part of a fundraiser for her daughter’s cheerleading team.
“I decided the candles would be a great addition to the market,” she says.
Gayla has built each part of her businesses around her family and the farm. Everything at Lemler Valley Farm’s booths is from the family farm in Bourbon, Indiana. 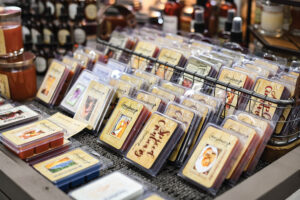 With her grandchildren now joining the Lemler Valley Farm crew at the market on the weekend, they make the sixth generation of the Lemler family to grow up through the market.
According to Gayla, her husband and his siblings began coming to the market with their parents at just a week old.
“Back in the very beginning for myself, we would raise vegetables and had a small gardening business we did for quite a few years,” Gayla says.
That changed with the cheerleading fundraiser and her first successful candle. Now, there are even more offerings at the family business booth.
Each different offering Gayla has ever worked on under the Lemler Valley Farm booth has evolved with her family. The candle business, Goosebeary Candle Shoppe, is no different.
As the leaves continue to change outdoors through the fall, and the color palette shifts to winter warmth, so do Gayla’s candles.
In years past, Gayla has had more than 100 different scents for shoppers to experience and purchase for themselves and as gifts. For the colder months this year, she expects to work on 80 to 85 different aromas to offer.
Through the fall, Goosebeary Candle Shoppe has deep pumpkin orange colored candles and apple reds to match their scents.
Aromas like pumpkin cheesecake, caramel apple and spiced caramel make their way in the fall into the regular offerings that include fresh brewed coffee, clove, beary hippie and freesia.
As the temperatures cool and holiday shopping begins, deep greens and warm reds join the mix. Goosebeary Candle Shoppe’s holiday offerings include christmas splendor and spiced cranberry.
“The candles are huge sellers, even with everything else we do,” Gaylasays of Lemler Valley Farm.
When purchasing a candle or aroma from Gayla, she is quick to rattle off the best ways to experience the candles and aromas. Because she pours her candles herself, chooses the wicks, jars and even designed her own labels, she can tell customers exactly how, where and when the trim the candle wick and how long to allow the flame to burn.
The candles are scented to burn with an even scent from the first burn to the last.
Along with Goosebeary Candle Shoppe’s atmosphere setting aromas, Gayla keeps herself busy with her grandchildren and other businesses she has tailored to their interests as they grow.
“Six years ago when my granddaughter was born, I started crocheting,” Gayla says. “That was the beginning of Knotted Bonnet.” 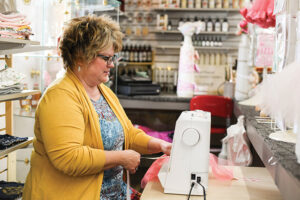 She has crocheted bonnets and hats for children available right alongside her candle shop.
“I use a lot of thicker and heavier chenille yarns,” she says. “They’re darling.”
She has also created and customized apparel for infants and toddlers. Included in this business are her felt face masks, which transform any time in to playtime for children, and customized tutus.
Further down the booth, Lemler Valley Farm sells its own maple syrup that Gayla says is a big seller for the holidays, right along with Goosebeary Candle Shoppe’s candles.
“Gift-wise, the maple syrup is huge,” she says.
During the warmer months, shoppers on a busy market morning will also notice fresh cut flowers and herb starters.
Gayla keeps busy, always evolving her businesses, keeping what works and adapting to what changes in her family’s life. She loves the South Bend Farmer’s Market for allowing her candle business to flourish, and for the rest of her family’s businesses to coexist.
“It’s a busy place with a lot of activity and a lot of excitement,” Gayla says. 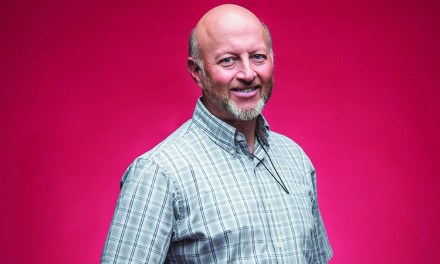 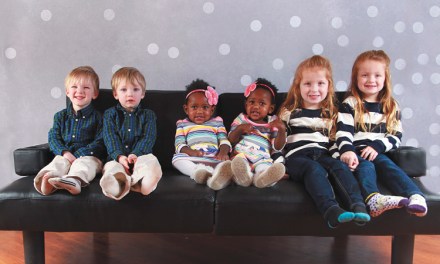