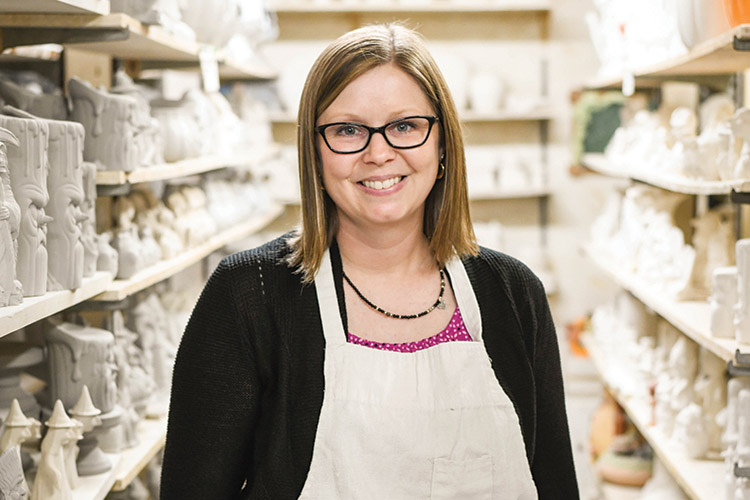 Shelves line every available wall at The Hobbie Hut. Aside from the rainbow of acrylic paints behind the counter, the shelves are jam packed with bisque pieces in varying stages of completion. Some are half-finished projects waiting for their owner to complete them, and some are new, flat-white pieces waiting for an artist to give them life.
The Hobbie Hut was started in 1981 by Abbie Feirick’s grandmother, Doyce, in an old animal barn on the property. Abbie spent nearly all of her free time in the shop with her grandmother, and she says ceramics and the shop are more than a way of life for her; it defines everything about who she is.
“I know no different,” she says.
She points up the hill to the house at the end of the driveway.
“I grew up in the house right there,” she says. “Every night I could, I’d paint until I had to go home because I had to go to bed. This is what my life has always had in it. So to be without it would be really strange.”
Doyce operated The Hobbie Hut originally as, well, a hobby. She would go on to run the business for about 35 years. When Doyce’s health began failing, Abbie and her mother, Julie Willis (Doyce’s daughter), decided it was important for the pair to keep the tradition of The Hobbie Hut going. The duo took over in January 2017.
“[Doyce] asked me: ‘Why would you even want to do this?’” Abbie says. “I told her I wanted to at least try. If it didn’t work, fine, but I didn’t want the doors to just be closed without giving it a go.”
Abbie works a 9-to-5 and helps out at The Hobbie Hut most evenings and weekends. Julie is working in the shop — whether it’s teaching classes, running the desk or creating pieces — every day.
“It’s pretty amazing that we were not only able to get it started clicking and hold its own, but we now have people that come from Ohio, Grand Rapids, Indiana, all over the place,” Julie says. “There’s not a lot of places around. There are some, but not a lot of places like this around anymore.”
At The Hobbie Hut, they pour the plaster molds with liquid clay and do slip casting (a more commercial way of producing ceramics which provides consistent pieces). The pieces they sell come in all states of being finished.
After pouring a piece, they offer the greenware version to be cleaned; the softer, more malleable form of ceramics, which is gray in color and requires that the mold lines be shaved off. They’re able to precut pieces into the greenware and personalize them with names, letters, monograms, icons, symbols — about anything a customer may want.
They have kilns and are able to fire greenware pieces and turn them into bisque; the harder, white form most folks are familiar with. If someone wants to skip that entire process, they also have bisque pieces ready to go that you can work on with the sprays, sealers, glazes and paints galore they have on hand.
If someone is just looking for a gift or a bit of inspiration, they have finished pieces, too.
“There’s no end to the creativity,” Julie says. “You could make it as complicated as you want to make it. I guess that’s part of the appeal though, too. That’s why we have two- and three-year-olds in here and 80-year-olds in here, because everybody can do it.” 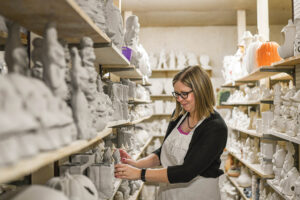 FUN FOR EVERYONE
While the work on a ceramic piece is a solo effort, many people like to work on their projects among friends in a group setting.
“We have people that come every week,” Julie says. “They come, you know, not only to work on their projects, but to see each other.”
Abbie and Julie offer classes at various times to offer instruction on the different aspects of working with ceramics.
“Some of them [who attend classes] are experienced, and some of them have no experience,” Julie says. “Part of [teaching them] is helping them build confidence; understanding that you can do it [learn all the techniques].”
Abbie adds that the classes are great for everyone because they teach fine motor skills that are useful in everyday life. It’s also a confidence building tool, she says.
“It’s a skill that you might be learning, but you’re having fun doing it,” she says. “To be able to, to start — not stop, not toss it out the window because you didn’t like the way it was — seeing it through to the end and end up with this great thing. That applies to life.”
The Hobbie Hut offers birthday party events, generally for children, where groups come in and paint a project alongside one another. Abbie says some families will pick a selection of items so the children have a selection of pieces to choose from, while other folks want to set a price limit and let the children choose from there. They decided to start the program about three years ago for a little girl named Jaden.
“That particular family set a dollar limit and let each friend pick whatever they wanted,” Abbie says. “They made the birthday girl a Christmas ornament, so she had a box full of ornaments from her friends.”
In the era of COVID-19, that’s changed a little bit. The Hobbie Hut hasn’t hosted any parties or groups since January 2020. Scheduling is in flux because of the pandemic, so it’s best to get in touch with Abbie and Julie ahead of time to try to schedule a group painting project — to ensure proper social distancing and follow state guidelines — or for class times. 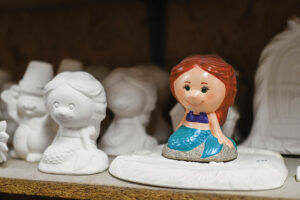 ONE OF A KIND
Abbie says, to her, the charm of ceramics is that she can make a unique item that can be given as a homemade gift.
“That, I think, is one of the coolest things from a place like this,” she says. “You will never find that same thing in that exact same finish anywhere else. Even if you try to make two alike, they might look a little bit different!”
Behind Abbie is a room filled with unfinished pieces. A thin layer of greenware dust covers everything in the rows of bisque ceramics. Some are small enough to fit in the palm of a hand, and some waist high. All of the pieces are an empty white and full of the potential of its future artist.
That potential is something that Abbie holds on to. As her grandmother’s health declined, so too did The Hobbie Hut go into a decline. But that connection to her grandmother and to her past was strong, and Abbie didn’t want to let such a unique thing go without a fight.
“All the smiles and all the laughs and this and that. It’s all important. It’s all business,” Abbie says. “It’s all part of the community that we’ve built here with people and the relationships that we’ve built and hard work that we put in. She’s the reason why we’re here.”
The community seems to have agreed with Abbie. The Hobbie Hut has seen resurgence in popularity in the past few years. Julie thinks part of that has to do with giving people an outlet to enjoy things that they love.
“We don’t have a lot to make us feel good anymore,” Julie says. “You need to have something, and this is it. And this is also something that creates a piece that gets passed down.”
For Abbie and Julie, that’s being part of three generations operating The Hobbie Hut. For their customers, it’s the pieces and memories they create inside the retrofit animal barn.
“[Ceramics] takes a moment in time, and preserves it forever,” Abbie says. She laughs. “As long as you don’t break it.” 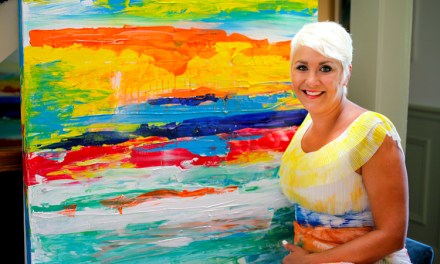 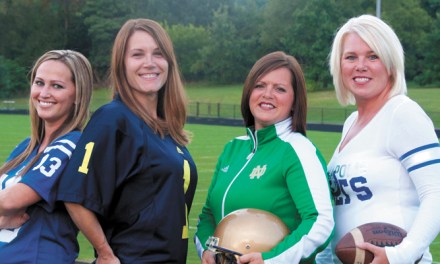 For the love of the game 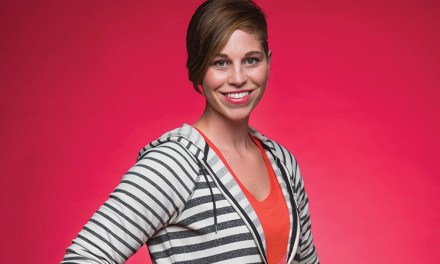 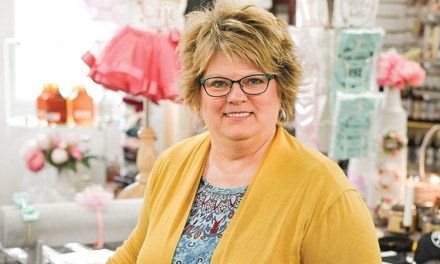